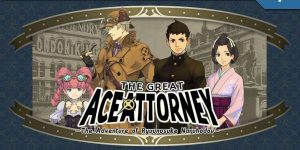 The Great Ace Attorney moves back from the present day to Japan’s Meiji period, which was around the years 1868 to 1912. This period of time is notable for seeing Japan move away from being an isolated feudal society and becoming more open to the West and modernised. In the game though, despite Japan being a big theme within the game, only the first case of the game actually takes place in the country. For all of the other cases the game sees you take a trip to the other side of the world to Victorian England.