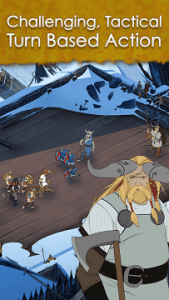 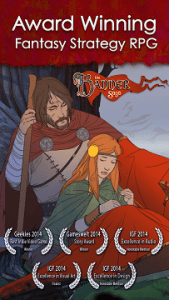 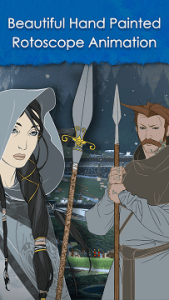 Embark on your own epic journey in Banner Saga, the critically acclaimed tactical RPG where your strategic choices directly affect your personal story and the world around you.

Leave your home and strike out on a desperate journey to save your people. Lead your caravan across stunning environments and into war with enemy clans and vicious Drudge soldiers. Build relationships and make choices that will shape the future of your clan as you scramble to survive in this beautiful, bleak world.

– A unique fantasy realm inspired by Norse mythology – explore a grim world shaped by the legends of the Vikings. Uncover ancient lore and battle tooth and nail to carve out a new bastion in a world abandoned by the gods.

– Real choices with real consequences – every decision you make on the trail, in conversation and during combat has a meaningful effect on the outcome as your unique story unfolds.

– Over 25 playable characters with unique personalities – form relationships in and out of combat with a variety of characters from 7 different classes, each with unique abilities and upgrade options to fit your play style.

– Strategic combat with permanent repercussions – choose your warriors, form your strategy and strike. Adapt to a dynamic battlefield where your tactics determine who lives and who dies. Victory, defeat and even the permanent loss of a character depends on the choices you make.

– Winner of the Geekie Award for best Indie Video Game, 2014, Independent Games Festival Finalist for Excellence in Visual Art and Honorable mentions for Design and Audio.