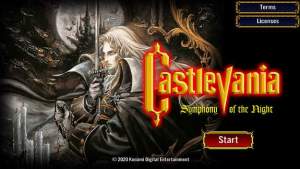 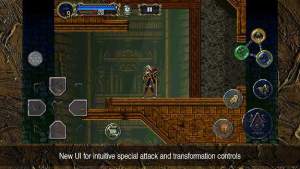 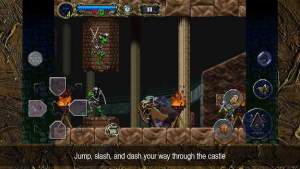 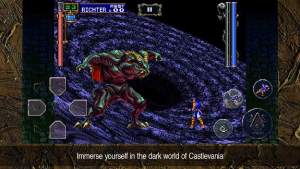 Let’s take a journey back to 1997 to a game which in turn then took us back to 1792. Castlevania Symphony of the Night was a ground breaking game that had stood the test of time. Playing it today on Android Devices is just as great as it was when it first came out. It took the Castlevania formula and added some major additions that created a completely new game model. So Take Classic Journey Back to its time and play your favorite game on Android phones..

You play as Alucard, the son of Count Dracula who is out to put an end to the Count reign. You storm into Castle Dracula, destroying everything in your way. Until you reach Death, who then takes away all your powers, leaving you with just your fists. So you need to recover your powers, and kill all the monsters before you can fight Dracula.

The big change from previous Castlevania games is the non linear style of the gameplay. While Simon’s Quest was non linear it wasn’t the same as this. This is a game that is much more in the Metroidvania gameplay style. The entire castle is yours to explore, with areas being blocked off until you acquire certain powers. These powers include the ability to turn into a bat and the high jump boots among many others.

Each enemy you kill will rewards you with ep, that builds up has you going up in level. This gets you added health and strength, making those old enemies seem like nothing and having you looking for new bigger monsters to slay. Now normally when a game series that is not an RPG adds these things it makes either become too easy too quickly or have you enter a room only to have the enemies use your blood as a new dynamic kind of wallpaper, this being a way of saying you are not ready for this area yet. But Symphony of the Night does a good job of having you level at a steady pace as you explore the castle.

The castle is huge,with areas in the sewers along with laboratories and libraries. Everything is very detailed and looks great. The rooms feel alive and different while each enemy is very detailed and colorful. You instantly know which enemy is which once you see it. Castlevania Symphony of the night is one of my Android game for now. I love it that they kept the series in 2D, the way it belongs. This allowed them to take the already amazing formula of Castlevania games and make it even that much better.