Forward Assault MOD APK is a second android game from Lucas Wilde. their first game was bullet force which were based on battlefield gameplay. now Forward Assault arrived and this one is based on counter strike go. if you have played bullet force then you will be glad to hear that gun mechanics and weapon recoil is almost same. A real competitive gameplay and strong mp server, this is what makes this game great. also available on ios. get Forward assault MOD for unlimited ammo and money.

Action packed tense battles and quick rounds of multiplayer fast sessions. forward assault is almost perfect example of perfect pvp real time multiplayer games. different guns and their realistic controls. since its a freemium game you will have to grind for money to purchase new guns and scopes. there is a chest system so you will get free guns and money from crates. its pretty much works like a ct game but in different era. you will get addicted for sure. get forward assault mod apk and you will have unlimited money and ammo. 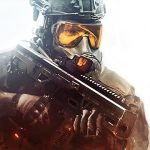