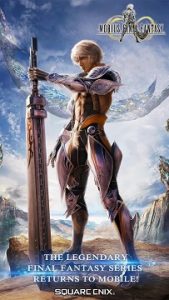 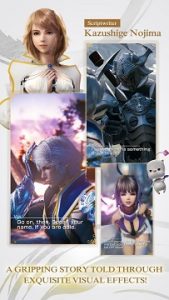 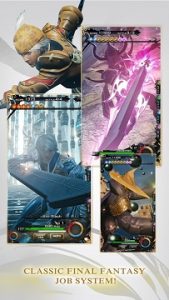 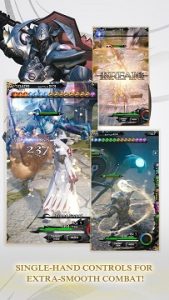 I have to say I really enjoyed my experience thus far,I’m not the biggest final fantasy fan in the world having only played a handful of the games usually what turns me off about final fantasy is its gameplay for me personally turn-based gameplay isn’t exactly my type because of my pinky preference. I was really interested to see how the combat for Mobius would work and I was pleased to find out that almost uses like an action orientated turn-based combat system.

The gameplay of Mobius final Fantasy MOD APK works with simple taps on the screen to attack your target down the bottom displays your moves. Attack displays three meaning that i can attack three times as I attack enemies i generate element orbs which he used to activate cards on the right side of the screen so for instance if i generate enough fire orbs I’ll be able to activate a fire based card which will then activate its special ability.

The enemies and what you face are also elemental basis as well meaning that certain elements are stronger against others. for example if i use a water-based special attack against the fire based enemy I’m going to do critical damage. if you have played kingdom hearts unchained you already noticed similarities.

As you guys have probably noticed by its game screenshots that the visuals for Mobius Final Fantasy MOD APK actually look pretty impressive considering that this is a mobile phone game the game play and cutscenes all have pretty crisp visuals which complements the final fantasy style though.

Complete more tasks and missions the games regression works for advancing from mission to Mission located on your world map as you can see down the bottom each mission explains the type of threat you’re up against.Final Fantasy MOD fans who enjoyed the stories of both final F7 and final fantasy 10 you’ll be happy to know that the story writer for both of those games has written the story for Mobius final fantasy MOD APK. you can actually spend a lot of time in this game collecting cards and power in them up.