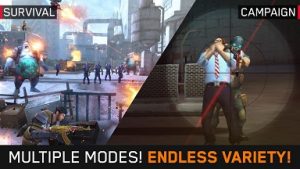 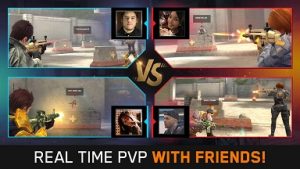 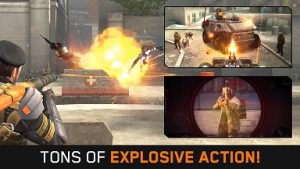 FRONTLINE COMMANDO RIVALS MOD APK+DATA Jump into the best cover based shooter on mobile! Dominate in real time PVP, battle it out in Survival mode, or dive into our action packed Campaign mode! Recruit squad-mates and build out your arsenal.

SURVIVAL MODE
Battle wave after wave of enemies as you snatch up loot and compete against friends and other players from around the world to see who can survive the longest!

TONS OF GUNS
Dozens of guns to choose from! Collect and level up all kinds of Sniper Rifles, Assault Rifles, LMGs, and Shotguns. Find the gun that best suits you.

CUSTOM LOADOUTS
Choose from grenades, missile launchers, drones, medkits, and other support items to make sure you are ready for whatever your enemies throw at you!

BUILD YOUR OWN SQUAD
Take up to 3 squad mates in to battle with you. Select from a host of wild characters with their own skills and attributes to make the ultimate squad!

GET SOCIAL
Link to Facebook to compete and work with your friends to climb the leaderboards. Create and manage guilds to compete against other players and earn awesome rewards!

Frontline Commando: Rivals is free to play, but you can choose to pay real money for some extra items.

What’s In The MOD:
GOD MODE

Requires Android: 3.0 and up