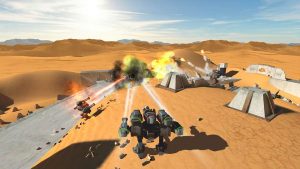 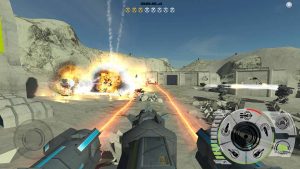 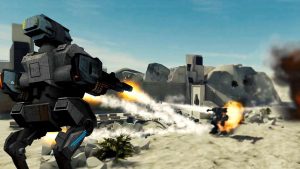 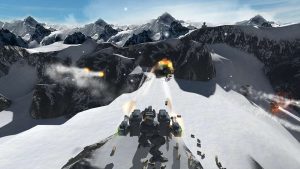 Mech Battle MOD APK is basically a war robot game. This game is set in the future just like other Mech Robots games. The world is now destroyed what remains are the robots. so you will be fighting with the Robots against robots. You are one of the few survivors, and you spend your time in the post-apocalyptic wasteland fighting for resources with other humans in a giant mech. Mech Battle MODDED APK is an online PVP Shooter game just like War Robots. But Downloading MOD APK will give you unlimited ammo and Free Premium VIP Account for life.

Gameplay of Mech battle is that means jumping and firing in the destructed world environment, PVP battles 4vs4 or Death Match. Game plays out in First Person view, You can view the battlefield and enemy players in third person view. You can simply select first person or third person view as per your liking. The graphics are not that great but the gameplay is. Developers Djinnworks GmbH are well known for their stick man games and not graphically intense games still Mech Battle MOD APK is an amazing game. Since its still a new game more robots and maps are yet to be added by the developers.

The controls of Mech battle are simple and interesting. Use left stick to move your mech and fire buttons to use your desired weapons. There are different buttons available to shoot as per your weapons which you have equipped. Alternatively you can upgrade and unlock more weapons. There is a premium VIP features which you will get free if you download Mech Battle MOD APK. You will get Premium VIP Rewards for free.